The BLS AGM was held on 16th November and in a move reflecting that both Erin Sawyer and Edd Thompson will have very young family responsibilities over the coming two years, the two will share the role and responsibilities of President over the two year term.

BLS is delighted to be able to support such a progressive change in our 251 year history and we very much look forward to supporting and working with them both in the next two years.

We would also like to say a thank you to Ben Holt, who gamely took on the President's role for two back-to-back terms during the pandemic - not an easy task or one he anticipated but it allows him to be the only consecutively twice appointed President in our history - an unprecented move or twice- presidented move as he likes to say!

Thanks also to former President Nick Lee who finishes his time on Council after many years of service and also to Jonathan Peacock, our Treasurer who has also stepped down. We thanks them both for their time and effort in supporting BLS over the last few years. We simply could not do it without our volunteer lawyers.

Welcome to our new officers, Rachel Fisher who comes in as Treasurer and Stuart Henry who joins us as Junior Vice President.

You can read Ben Holt's AGM speech here providing his overview of the last year and  Erin Sawyer and Edd Thompson speeches setting out briefly their hopes for their co-presidency. 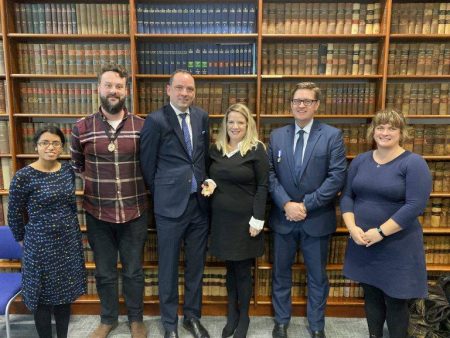