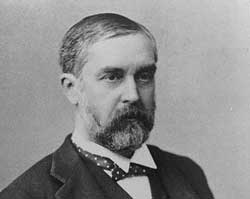 In the late 19th Century, Solicitors were prosperous in Bristol and many of them became men of affairs. Lewis Fry (Bristol Law Society President in 1878), the grandson of the founder of chocolate company, JS Fry & Sons Ltd, is a good example of a local solicitor who participated in public life.

Born in 1832, Lewis Fry was articled to Joseph Bevan Braithwaite, a Quaker solicitor - the Fry family were Quakers - before becoming admitted as a solicitor in 1854, from when he practised as a solicitor in Bristol. He gave up practising when he entered Parliament, representing Bristol and then Bristol North between 1878 and 1900.

However, whilst practising Fry was a City Councillor for 20 years and also served on the Council of The Law Society, becoming President of the Metropolitan and Provincial Law Society. Lewis Fry was also elected as the first Chair of the Bristol School Board and he was also influential in the founding of Bristol University. Fry was the Chairman of the Council of the University College, Bristol, which was the fore-runner of the University, and in that capacity, Fry was a driving force in setting up the formal University in 1909 and working towards obtaining a Royal Charter.