THE COURT OF PIE POUDRE 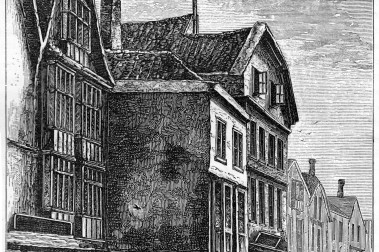 If you drive to the Old Market roundabout at the end of West Street, you cannot fail to notice the Stag and Hounds Pub on the corner, overlooking the underpass and the Evening Post building. A plaque on the pub proudly announces that this was the site of the Court of Pie Poudre - but do you know what the Court of Pie Poudre was.

The clue lies in its location, Old Market, for Courts of Pie Poudre were occasional courts which were set up during times of market to deal expeditiously with disputes that arose in the market ranging from thefts to disputes between merchants. Decisions had to be made within a day and a half of an accusation and the necessity for such courts arose from the fact that markets attracted visitors from outside the locality.

Normally there would be three or four judges sitting in the Court and it was for the accuser to prove his case. Unusually for the times in the Middle Ages, if a case was proven, the Defendant could then adduce his own evidence to counter the accusation - rather than normal methods of proof such as compurgation. Sanctions were generally fines or the pillory, but non-payers could have their goods seized.