The skeleton of John Horwood 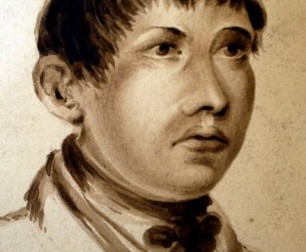 In the TV series Whitechapel the notorious Bristol case of John Horwood was mentioned. This unfortunate was convicted of murder in 1821. He was the first person to be hanged at Bristol New Gaol.

Horwood was an 18-year-old miner from Hanham and the tenth child of Thomas Horwood. He was in a relationship with girlfriend Eliza Balsom, which ended in 1820. Horwood apparently swore that he would ‘mash her bones to pieces’ if he ever saw her with another man.

In 1821, he saw her with a new boyfriend and threw a stone which struck her on the temple. The stone only caused minor injury, but she was treated at the Bristol Royal Infirmary for a depressed fracture and Dr. Richard Smith decided to operate, causing a fatal abscess, and she died, four days later, on 17 February 1821.

Dr. Smith then reported Horwood to the police, who arrested him and tried the young man for murder. The trial took place at the Star Inn in Bedminster on 11 April 1821, and Smith testified against him. He was hanged two days later and his body was handed back to Smith for dissection.

Smith also had the body skinned, tanned, and used to bind the papers in the case. This document, a Book of Skin, is now kept in the M Shed museum in Bristol. It is embossed with a gallows motif. The practice of anthropodermic bibliopegy is known to have been practised since the 17th century, and it was common to use the murderer's skin in this manner during the 17th and 18th centuries. The book is too fragile to be on public display but has been digitised and can be seen online here.

Smith kept the skeleton at his home until his death, when it was passed to the Bristol Royal Infirmary and later to Bristol University. His skeleton was retained, and most recently was kept hanging in a cupboard at Bristol University with the noose still around its neck.

Horwood was finally buried alongside his father on 13 April 2011 at 1.30pm, exactly 190 years to the hour after he was hanged.

Horwood composed a poem before his death which was made public after his hanging. The poem read:-

JOHN HORWOOD IS MY WRETCHED NAME

AND HANHAM GAVE ME BIRTH

MY PREVIOUS TIME HAS BEEN EMPLOYED

IN RIOTING AND MIRTH.

THY SPIRIT, OH, IS FLED!

AND THY POOR MANGLED BODY LIES

NOW NUMBER’D WITH THE DEAD.

CURS’D IS THE HAND THAT GAVE THE BLOW

AND CURS’D THE FATAL STONE

WHICH MADE THY PRECIOUS LIFE BLOOD FLOW

FOR IT HAS ME UNDONE